Well it has been the first week at starting to change my diet, and I am slowly making the switch to the Paleo Diet.

For those that don’t know, the Paleo Diet is based on the theory that genetically we are optimised to eat the type of diet we had from a million years ago to about 10,000 years ago when we suddenly discovered agriculture and started eating much more processed carbs. So effectively it suggests you shift your diet back to reduced carbs, and removing processed carbs, more protein and more healthy fat. For athletes, the rules have to be slightly bent to allow for all the exercise, so just before, during and immediately after you increase your carbs and use carbs with a higher GI, so things like pasta, energy drinks/bars/gels, even chocolate. The rest of the time, you concentrate on removing all your empty calories, so there is a lot of fresh fruit and veg and salad, so you have lots of nutrients.

Instead of immediately switching, I’m doing a more gradual change. I’m doing it meal by meal, so this week I’ve been concentrating on breakfast. When I’m in training my snacks are usually pretty healthy, but I’ve been weening myself off crisps, yoghurts, and cereal bars, and moving myself to more fruit, and with the increased protein I shouldn’t be having as many cravings anyway. When I’ve been training before breakfast, I have my usual big bowl of cereal, though will need to think of some alternatives. When I’m not training, my breakfast has been some form of meat and fruit: 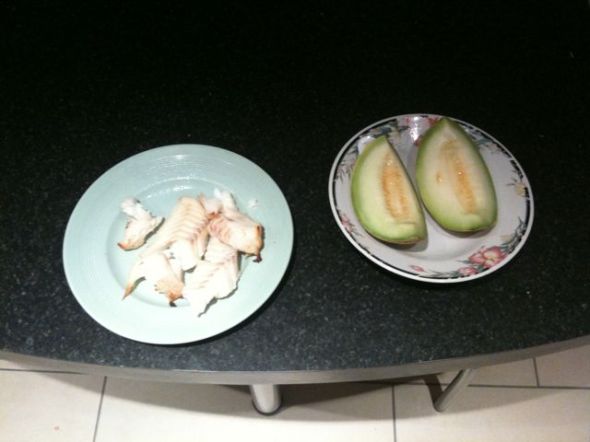 Now that I finally got round to getting some eggs I’ll have omlettes as well, the increased calories helping when I start to train heavier.

The rest of my diet is pretty good, but there are a lot of processed carbs, such as rice and pasta in it, so I’m working at getting these out. This week I’ll concentrate on my dinner, and try and switch that. But thankfully, if I’m eating right after training I can have my usual spag bol! Lunch is gonna be the hard one, not having my sandwiches, but it should be ok. I’ll still have my lollies and the odd chocolate bar, but as long as it’s swamped by salad and fruit it’s fine!

In terms of how I feel, you certainly notice the difference when you eat healthily and not lots of junk food. Admittedly I feel less hungry during the day with more protein to fill me up, and no blood sugar level spikes. In terms of performance, it’s difficult to say. I haven’t really been in full training for quite a long time, so can’t really compare it. I do think however, that I am recovering a bit quicker, my legs don’t feel quite as tired the day after as I remember they used to, but it could be improved fitness and less training. In a month or two when I am training fully, it will be interesting to look at my old diary and see if I have an improved recovery and performance. I certainly think the extra protein will help, as I wasn’t eating enough before. Whether the extra fat will help my body use more fat as it is supposed to will be interesting to see. Certainly it has been a change for the better though.

Well I think I may have been right about me peaking in my last post, because after I think I crashed and burned! But first things first, the fitness testing.

It was in two parts, the first part was a standard VO2 Max test on the bike. For those that don’t know, this basically involves sitting on a rather fancy exercise part which is hooked up to a computer, and your wearing a mask which is also hooked up to a computer. You start off at a fairly easy intensity, and the bike adjusts the resistance so that for the cadence you are pedalling at you keep a constant power. The power is then upped every minute until you can’t continue any more. The mask measures how much oxygen you use up when you are at your maximal effort. This will give you your aerobic capacity, which to be honest isn’t really going to give me much as such, but will set a good marker for future tests and should tell me what I am capable of in my current state.

The second test was a 5k run time trial, also with the mask, and hooked up to an EMG, with electrodes on my calf and shin to measure muscle recruitment. I also had motion markers and as video recorded. This sets a precedent for how I run with fresh legs and then can be compared with in the study. This won’t have been helped by pounding it on the treadmill causing my shins to ache like hell, but I still managed a good performance. I now have two studies to do, 20k bike and 5k run bricks. One of these is running the first kilometre at 5% over my average 5k speed, and the second one at my average speed. After the first k, I get to choose my own speed based on feel but won’t actually get to see my speed. The point of the study is to try and find out if there is a ‘better’ way to run of the bike. This is based on the fact that elite triathletes at olympic distance tend to run hard off the bike then hang on for the rest of the run, whereas elite 10k runners tend to run a constant pace. The study tries to see if there is any benefit in either method. So for taking part in the study, I get free fitness testing (which saves me a fair bob) and a couple of hard brick sessions.

Ok, I think it’s time to admit I tried to get into training too soon after my IM, a typical rookie error. I think physically I was fine, well enough to train lightly. Mentally I was exhausted. Couple that with settling into work, some personal issues, a hell of a lot of travelling and missing too much sleep, just drained me. So it had its usual affect and I missed a week of proper training. But to be honest I’m not too bothered, I’ll get my feel back in the pool fairly quickly, some good speed sessions from the study, manage to keep my fitness ticking over. A 14 hour sleep has certainly managed to fix a lot of problems, and a lazy day of doing absolutely nothing is something I really needed. So the plan over the next month or so is light intense training, a few long sessions to keep fitness up and put in a fun performance at Fleetwood Tri. I am also going to enjoy my 21st, and freshers week with my friends and have my life back before I settle down into hard training again.

Settling down involves everything discussed in previous posts, including yoga, weights, structured training and getting back into it. I have finished reading the Paleo Diet and am convinced enough to try it out for a month. To be honest I seem to be going off lots of carbs anyway, and really finding big servings of plain rice unappetising. So I will try it out for a month, but what the hell do I eat for breakfast? Turkey breast and fruit! When do I cook that? So that is going to take some planning but it will be interesting.

Finally, Ironman Switzerland have been kind enough to move the date of it a week forward. Not only does this ruin my plans for a holiday afterwards as it was supposed to coincide with me finishing work, it also reduces the time I have to recover from IM Lanzarote if I do it. 11 Weeks should be OK, but it does mean that I might not be expecting to go as hard as I could at Switzerland. As this is man A1 race of the year, I may hold myself back at Lanzarote but we will see. For starters, I need to see if I can still enter when I can afford it. If I can’t then it simplifies things massively, but is not ideal. Also, next year is not a year when I expect to be at full potential, so may just see how much abuse I can take. We shall see, all I can say is next year should be a good year, just need to sort my knees out (again) and avoid the potholes!

I can be contacted here for any questions, comments or queries and will try to reply as soon as I can!